CHRI Africa
Accra, Ghana
The Commonwealth Human Rights Initiative (CHRI) is an independent non-governmental organisation created to ensure the practical realisation of human rights in the countries of the Commonwealth. We push for an adherence to the Commonwealth's Harare Principles and the United Nation's Universal Declaration of Human Rights. CHRI was established in 1987 after several Commonwealth countries voiced their concern about a lack of focus on Human rights within the Commonwealth organization. CHRI currently has three offices; in Delhi, London and Accra. The Africa office was opened in Accra in 2001 and is at the forefront of the fight to uphold basic human freedoms in the region. We work in three main areas of human rights: Human Rights Advocacy; Access to justice and The Right to Information.

Another way in Nigeria? The Pursuit of Peace Across the Religious Divide

In its fifty one years of independence Nigeria has developed a reputation for entrepreneurship, great economic potential and being the home of internet scams.  More tragically, it is also seen as a place prone internal division, civil war, coups and political violence.
Unfortunately for Nigeria a reputation for armed conflict has been largely deserved. In April and May the county was rocked by violence when the electorate went to the polls. When the southern President Goodluck Jonathan was declared the winner many supporters of the northern challenger, Muhammadu Buharinow, suspected foul play and took to the streets in violent protests. In the ensuing violence hundreds were killed and thousands more displaced.
Last month the terrorist activities of Boko Haram in northern Nigeria are making the international headlines. Boko Haram aims to establish an Islamic government in Nigeria. It has carried out a number of attacks in the country including an attack on the national police station in Abuja and a drive by shooting on a beer hall in the town of Maiduguri. On Wednesday city authorities in Abuja were forced to impose a curfew in order to curb the activities of the extremist sect. 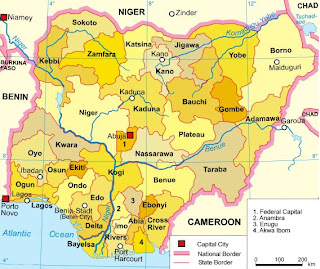 Attacks have been primarily carried out in the north- eastern states
In a society as divided as Nigeria is there any hope of creating lasting peace and a united nation? Can heterogeneous societies unite? Well yes. Peaceful nations can be built out of disparate groups. This is what the Nobel Laureate Amartya Sen argued in an address to The Commonwealth Secretariat in London.
“The engagement through which we unite very often takes place through not emphasising where we differ but where we agree” Sen says.
In an article called “Peace and Democratic Society” Professor Sen identifies the importance of shared human identities and civil approaches for conflict resolution and prevention. He uses the example of Bangladesh, a fellow member of the Commonwealth.
Bangladesh is a secular country borne out of the violent division of the old British ruled India into India and Pakistan and then into the modern states of Bangladesh, India and Pakistan. Nonetheless, since gaining independence it has remained largely free from conflict. Sen argues that Bangladesh has been able to stay united by not discussing the differences between Buddhists, Hindus and Muslims but by emphasising things that all three groups in common (such as the Bengali language).
Sen goes on to add that dividing the world into civilisations based on religious beliefs leads to situations where people are not connected on the basis of anything shared, but are instead defined by their differences. Such a division, he argues, leads to tension between the differing states.
If the Boko Haram were to break away from Nigeria and form a state along Islamic lines would this cause a decline in violence? Or, following the argument of Sen, would it just turn an internal conflict into an international one as suspicion between a Nigerian Christian rump state and its new Islamic neighbour spills back over into war? Certainly where partition has taken place in the Africa in the past there has been, at best, a mixed record. Relations between Ethiopia and Eritrea have been relatively cordial since their split in the nineties but the independence of South Sudan from the north is fraught with difficulties. Just last week the UN had to vote to supply peacekeepers for Abyei in order to bring about a stand down from the two opposing forces disputing the border town.
I think, on balance, genuine peace does have a chance in Nigeria if basic grievances are taken care of. People must be given a reason to have faith in the electoral process, must receive a fair share of the nation’s wealth and be moved above the poverty line. I also agree with the sentiments of Sen, national dialogue is important. Nigeria needs to find a common ground. This may not be religion or language, but there are always common threads that can unite a nation. As a county widely tipped to overtake South Africa as the continents biggest economy by 2025, perhaps the pure industry of the people can be a uniting force?
Henry Wilkinson, CHRI Africa
Posted by CHRI Africa at 01:00