CHRI Africa
Accra, Ghana
The Commonwealth Human Rights Initiative (CHRI) is an independent non-governmental organisation created to ensure the practical realisation of human rights in the countries of the Commonwealth. We push for an adherence to the Commonwealth's Harare Principles and the United Nation's Universal Declaration of Human Rights. CHRI was established in 1987 after several Commonwealth countries voiced their concern about a lack of focus on Human rights within the Commonwealth organization. CHRI currently has three offices; in Delhi, London and Accra. The Africa office was opened in Accra in 2001 and is at the forefront of the fight to uphold basic human freedoms in the region. We work in three main areas of human rights: Human Rights Advocacy; Access to justice and The Right to Information.

So what is wrong with the draft RTI bill?

On Monday The Coalition on the Right to Information (chaired by CHRI) held a press conference with Ghana’s Parliamentary Press Corps on the RTI bill. This was the first significant publicity campaign since its participation in the International Labor Day Protests.
The day was used to educate the press on the RTI bill and canvass their support in the push to get the bill passed through Parliament. It was also used as a platform to raise concerns about the bill in its current form.
So what is wrong with the current bill?
1. Exemptions to the right to information should only be justified on legitimate grounds. The bill in its current form is overly broad, and provides for blanket exemptions of certain departments. The correct way to determine whether the information should be exempted is the “harm test”—whether the information will cause harm to the public interest, and that harm outweighs the interest in disclosure.
2. The timeline provided by the bill for disclosure of information is unduly long.  Under the current regime, a citizen could wait up to 21 days just to find out if the information will be disclosed, and up to half of a year to finally get the information.
3. The bill does not recognize the importance of a robust recordkeeping scheme. Even the best RTI bill will fail if there are no records from which to draw information.
4. Certain private bodies should be accountable under the bill automatically. This determination should not be left to the discretion of the Minister for Justice.
5. The current appellate process for request denials is too arduous. Rather than channeling appeals through the Minister of the department, and then to the Supreme Court, the Coalition suggested an independent tribunal to evaluate appeals. This tribunal, the Information Commission, would also help educate the Ghanaian citizenry about their rights under the bill.
6. The fee schedules in the bill exceed the bounds of what it would actually cost to produce the information, which hinders the request process. The current fee schedule does not recognize that most people in Ghana cannot afford to pay the fees, especially considering that if a request for information is denied, the fee paid to obtain that information is not returned. 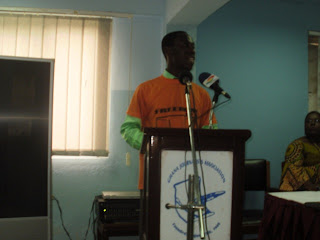 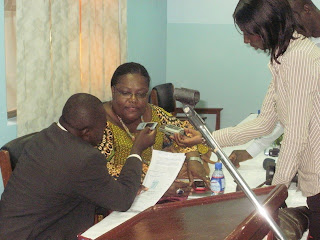 Photos: Top: Johnathan Osei-Owusi from POS Foundation opens the Confernece. Below: Nana Oye Lithur from the human Rights Advocacy Centre discusses one of the points of the bill in finer detail.
See what the press had to say about the day….
http://www.modernghana.com/news/330349/1/coalition-tears-information-bill.html
Nina Decker, RTI Intern, CHRI Africa
Posted by CHRI Africa at 07:48